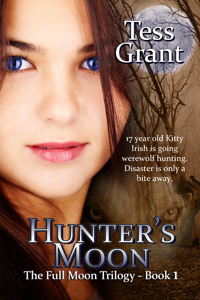 Hunter’s Moon, Available from Books We Love at a number of retailers.

(Previously published as Trajectories) Kitty Irish has heard all the rumors swirling around Daniel Phinney. Most of them involve a gun, a flask, and a temper. One chance encounter with the WWII veteran over a grisly find in the woods pulls the cover off the dark secrets of their small town, and Kitty is drawn into an unlikely partnership. Armed with an antique rifle and a handful of homemade silver bullets, the two form an efficient team. Unfortunately, their game is werewolf hunting, and disaster is only a bite away. 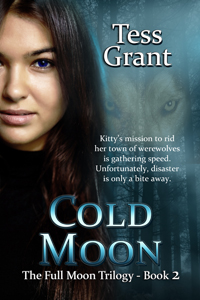 Cold Moon, Available from Books We Love at a number of retailers.

All Kitty Irish wants to do is complete the task given to her by Daniel Phinney—free their small town from the werewolves that plague it. But every move she makes sets off an unforeseen reaction. She burns Phinney’s cabin to the ground to lay her mentor to rest. Instead the hot ashes raise up a detective bent on connecting the dots between Kitty and his cold case list. The truth she tells to free a friend brings her an unexpected ally in the fight. And the letter she opens shows her a window into a past she never knew she had. Kitty’s mission is gathering speed.

Wolf Moon, Available from Books We Love at a number of retailers.

Too bad Kitty’s plan unravels. Her father spends his time watching the tree line from the safety of a wingback chair. Her hunting partner analyzes college campuses while she analyzes kill sites. When her brother finds a new friend in a long lost uncle, Kitty’s war with the werewolves becomes a battle for more than just her own life.

Whatever Phinney prepared her for, this isn’t it.

In the final installment of the Kitty Irish Trilogy, Kitty’s past meets her present in an explosive confrontation. The battle comes to her front porch making the fight for the future more than claws and fangs.