Rural Internet update for those interested: (If not, skip to the next paragraph now.) Our ISP came over and moved our little antenna thingie–from the top of the old TV antenna on the farmhouse to the light pole by the barn. So far, so good! Keep your fingers crossed. Lots of spring storms to get through yet.

It’s Wednesday, you lucky people, and that means it’s time for Wednesday Ramblings. This week, the gang (Bronwyn Green, Kris Norris, Jess Jarman, Leigh Jones, Jenny Trout, Gwendolyn Cease, and Kelly St. James) and I take a look at some of our favorite movies.

I had more favorite movies when I was teenager–the kind I would watch over and over again (Star Wars anyone?). Now that I’m older, I find that I have fewer favorites, but more movies that I just plain enjoy. Apparently I am now more easily entertained. Although that seems unlikely looking back at my younger self; I’ve always had leanings that way.

I have identified two broad trends in my watching habits of late…Westerns and cult favorites. The first may have something to do with men in dusters, the second to DH and my sense of humor. In some cases, there is a strange overlap between my two categories.

So, Westerns. Any of them. Especially if they have a younger Clint Eastwood, Viggo 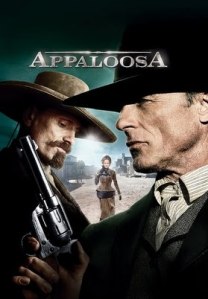 Mortensen, or a man with a duster in them. I want to write a Western some day. The whole concept…sparse dialogue, bigger-than-life characters, the culture of violence…fascinates me. Appaloosa is one of my absolute favorites. Take a West Point graduate with an 8-guage shotgun and pair him with a gunslinger with word-finding difficulties. Slow them down to the pace of the hot dry West and see what happens when a woman compromises their acute sense of right versus wrong. Love it!

Now…on to cult favorites. Raising Arizona. The Big Lebowski. The Men Who Stare at Goats. For the most part, DH and I are Coen-brothers junkies. When we’re really lucky…as in the case of the new True Grit…the Coen brothers do Westerns.  I also just

realized Jeff Bridges is in three of the five movies I just mentioned, so maybe we’re just Jeff Bridges junkies.

So, that’s me…a rather strange mix. What’s your current trend in movies?

7 thoughts on “A Few of My Favorite Things: Movies”