This week the Monday Muse bailed on us…or at least she chose to hit us all in different ways. This week, Chris Allen-Riley, Leigh Jones, Lynn Doezema, and I are mixing and matching. Each of us is writing about something different, so be sure to check it out.

I love to read about cryptids–Bigfoot, Nessie, Chupacabra. After writing about werewolves, of course I had to delve into the Dog Man. I don’t actually believe said critters exist–well, maybe Nessie; I just believe the world would be a far more magical place if they did. That said, the kids and I delight in searching out evidence for cryptids. It’s also a good way to teach your kids the scientific method. The part where the easiest explanation for phenomena is usually the right explanation is always the hardest part for my girls to take.

Along with looking for cryptids, we love to look for wildlife in general. Where we live in Michigan, there are rumors of cougars and bears, although we’ve seen neither. That doesn’t stop us from looking, though.

On weekend afternoon, DH, the girls, and I were driving when we spotted a large animal moving through a field at the edge of a woods. I made DH turn around and go back so we could watch it (he’s long-suffering, my DH is!). Of course, I didn’t have a camera. Our children’s formative years are full of milestones unrecorded because of my inability to remember the d*&% camera.

So…here it is…Dougar field. Doesn’t look like much, does it? It’s empty so don’t strain your eyes; as mentioned, I didn’t have the d*&% camera.

Anyway, moving through the trees in the center of the photo was a big tan creature. Four legs, long tail, long bodied. Here’s an interesting comment on eyewitness accounts. DH and kids insist the critter had that rolling shoulder walk that cats have. I insist it didn’t. What struck me was its tail–long, thick, ropy looking–way longer than a dog’s tail. But its muzzle was brown. So we sat and watched it move through the field and disappear. Then the debate started: Dog? Cougar? Dog? Cougar?

Eventually, we decided it was a Dougar. 🙂 We debated on the term cog, but given its more general usage, that didn’t cut it. So I think we just invented our own cryptid (or maybe it’s a hybrid). DH thinks I should stop at nearby houses and ask to see their dogs. I think I’m interested in the advancement of cryptozoology but not that interested. 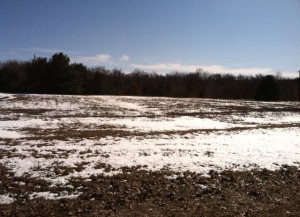 We keep looking but we’ve never seen the elusive Dougar again. The girls are rather mournful every time we drive by the field and it’s empty.

So, what do you think? Dog? Cougar? Or Dougar?

Have you ever seen something in the woods you couldn’t identify?

P.S. Remember when the Dougar hits the official cryptid lists, you heard it here first.