I have anatidaephobia and I’m not afraid to admit it. It’s true…anatidaephobia..the fear that “somewhere, somehow, a duck is watching you.” (Thank you, Gary Larson, for that diagnosis, because really knowing what’s wrong with you is half the battle!)

This disease started several springs ago. My family and I went to the farm store to get chickens. Of course, next to the tiny chicks were cute little yellow fuzzy ducklings. I told my family no. I told them ducklings were not what we wanted on our farmette.

I’m sure you know what’s coming. How many ducklings did we come home with? Two! Daisy and Petunia. Did I mention how cute and fuzzy and yellow they were?

It started to go south when Daisy developed epilepsy. I’m not kidding. The poor little duckling would gaze skyward, then tilt her head backward all the way until she flipped over. Then she would shake, stand up and do it all over again. The little critter got so

me relief when we took her out of the pen and allowed her to free range around the pole barn. This did result in some mess as you may imagine.

Daisy seemed to grow out of it. And really the two of them were quite cute (and yellow and fuzzy). 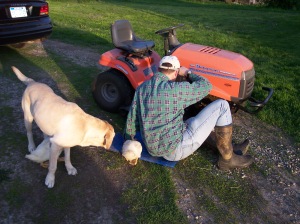 Along with the dog, they even did small engine repair (with a little help from someone with opposable thumbs).

The problem started when we noticed how big Daisy was getting compared to Petunia…and aggressive. You see, it turns out ducklings aren’t sorted by sex at the farm store. We, the naive hobby farmers, thought we were getting two female ducks, but we really got one of each. Daisy was a BOY!

It went downhill after that. Daisy didn’t have any more seizures but he developed a lot of other behaviors that weren’t so great. Suffice it to say, ducks are not discreet. He refused to be penned at night. As nice as the free range concept is, it’s crap on your lawn (literally). He began to attack the dog (Daisy liked to catch Frank at his most defenseless moments–when our lab was taking a bathroom break). He even started to chase the kids.

Eventually Petunia joined in the fun. She attempted a short-lived raid on my husband from behind. (All that quacking gave her away.) Shortly after that, I began composing a free-to-any-home-that-can-handle-them ad. My sister came to my 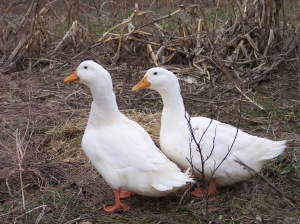 rescue. From the far reaches of North Dakota, she searched out a Craigslist ad for a family that lived within ten miles of us who wanted ducks. They are better farmers than I. Daisy and Petunia are now ensconced on a new farm.

I am left only with some pictures and memories and a bad case of anatidaephobia.